One of the best things about using a cycle as a form of transport is that there's very little that can go wrong with it without some warning, and with a little knowledge and practice most of those can be fixed - at the roadside if necessary - with a few basic tools and spares. I'm going to talk about some of the tools you might consider carrying with you on your bike, so that you can keep on riding when trouble arises.

This isn't going to be a bike repair tutorial - for that I suggest reading the late Sheldon Brown's excellent website, searching YouTube or enrolling on a cycle maintenance class, such as those offered by Birmingham Bike Foundry. Neither is it a set of product reviews - the items I've mentioned are mainly by way of illustration, rather than specific recommendations, and this article is more than long enough already!

It's all about compromise

Carrying tools and spares on your bike is a trade-off: To be fully prepared for absolutely anything you'd end up carrying nearly a whole spare bike. At the other extreme a non-existent tool kit - while lightweight and admirably cheap - is likely to result in a long walk home for even a minor problem. The trick is finding the right balance.

Mostly, that'll be determined by the type of riding you're doing, the type of bike you're doing it on, and how big a deal not being able to repair it is going to be: If you're only using your bike to nip to the local shops, then you can probably wheel it home if something goes wrong, or maybe lock it up and come back later. If you're commuting on a folding bike, then perhaps the easiest way to deal with a mechanical problem is to fold it up and jump in a taxi. If you're out for a training ride, then you might have a family member who can be called to pick you up in a car, but you risk becoming unpopular if that happens too often. If you're on a solo bike-packing trip in the Welsh mountains or something, you'll need to be a bit more self-sufficient.

The other thing that's going to influence what's worth carrying is what you actually know how to fix. I'd suggest that every cyclist should ideally know how to repair a puncture (even if they usually choose to get someone else to do the dirty work), and that basic brake and gear adjustment are skills that are well worth learning. Beyond that you start needing more advanced (and often bike-specific) knowledge, but in an emergency that might well be available via a phone call or mobile web browser, or even from a passing cyclist, so don't completely discount carrying things that you aren't confident to use. (I once talked a friend through replacing broken spokes as she sheltered from the rain in the doorway of a frustratingly closed bike shop.)

And then there's the big question: What's actually likely to go wrong? While pedals falling off or the frame breaking make for exciting stories, they tend not to happen very often. Realistically, the most common reason for getting the tool kit out is the humble puncture, and these are fairly easy to repair at the roadside. After that, I find that it's usually things that simply need re-adjusting as components wear, or bolts working loose (eg. those securing mudguards or luggage racks). Chain and cable related problems aren't uncommon (though can usually be avoided with good routine maintenance), and although broken spokes shouldn't really happen, some riders seem to get them with tedious regularity. Those - along with lighting failure if you're riding in the dark - are the problems that I'd have in mind while building up a tool kit. Most other failures are either non-repairable at the roadside or appear gradually enough that you can complete the ride before dealing with them.

One kit to fix them all?

Looking for inspiration for this article, I rounded up the various tools and spares that were attached to my bikes and lurking in the depths of various pieces of luggage, and sorted them according to type. The first thing I noticed was that there was a lot of duplication. That makes sense, because when you've got more than one bike, you can either have a single tool kit that works for all of them, and hope you remember to move it across when you use a different bike, or you can have a individual kit with the right items for a each bike, and keep them together. Both approaches are valid, and which works best for you will depend on how similar your bikes are, and how often you tend to use them. (If you only have one bike, you're spared this dilemma, but remember that if you're riding with children, you'll want a kit that fits their bikes too.) I seem to have reached a compromise where two of my bikes have their own dedicated tool kit, and a more generic one is shared between the others.

The second thing I noticed was that I had an unreasonable number of different types of inner tube. It's been said that I'll ride anything as long as it's not a standard road bike, and this inner tube collection would seem to confirm it. Carrying a spare inner tube is an important part of the kit for dealing with punctures: Not only is it easier to swap the tube than it is to patch a hole (especially if it's raining), but sometimes the deflation is due to a problem with the valve itself, and a patch won't help you. If you have more than one size tyre, then you'll definitely need more than one spare tube.

The best way to carry an inner tube is rolled up tightly with some sort of protective bag around it so it doesn't get rubbed as it rattles around in your bike luggage. A friend swears by using his children's outgrown socks for the purpose, but in the absence of those I've settled for wrapping inner tubes in several layers of cling-film, along with (and this is the clever bit) a slip of paper giving the tube's vital statistics in large, friendly letters, so that if you have bikes with different size tyres you don't accidentally pack the wrong one. The same cling-film technique can be applied to spare gear and brake inner cables (bottom right of photo), neatly containing the bare end and preventing it from fraying. Spare cables are lightweight and take up very little space, but depending on the types of brake levers / shifters on your bike, may be a nightmare to replace.

A spare inner tube is no use without a pump - the second photo shows my collection:

Following on from pumps is the puncture repair kit. The one in the photo is from my touring bike, which also contains an assortment of other spares that might come in handy on a multi-day ride a long way from any bike shops. If you're just commuting, you won't want half of this lot (indeed, I carry much smaller kits on my other bikes).

From left to right:

Next we have the multi-tools. These are a good way of carrying the assorted Allen keys, small spanners and screwdrivers you're likely to need on a bike - useful for adjusting simple things like saddle height or changing batteries in lights, as well as for more serious repairs. The fasteners used on different bikes can vary a surprising amount, particularly on older ones, so there's no single solution that will work for everyone.

The final photo is the really random stuff, mostly for touring rather than regular riding: 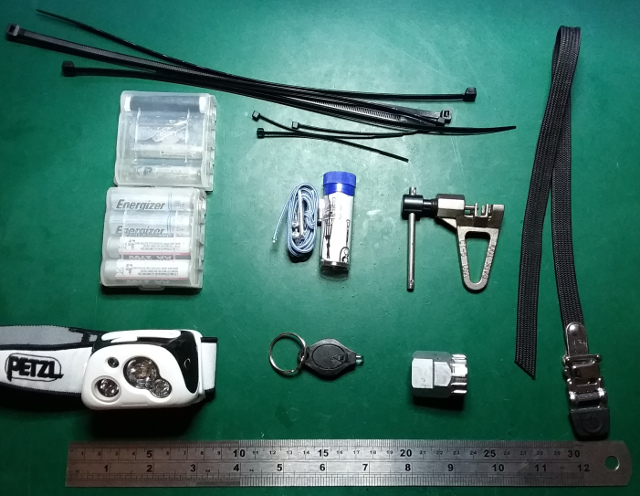 Repairs are always best done (and ideally practised with the tools you'd use at the roadside) indoors in the warm, but having the tools and confidence to deal with some of the more likely issues gives you the freedom to ride further without worrying about what might break (this is particularly important to me, as I have knee problems which limit my ability to just get off and walk, and don't have a car-owner at home to come and rescue me). Most tools don't have to be expensive to work well, either, as with most cycling products, beyond a certain point you pay a hefty premium for reduced weight, rather than higher quality.

I also haven't touched on the things that might go wrong with the bike's engine. Depending on how epic your ride is going to be, you might also consider carrying a basic first aid kit, some food and water, extra clothing, tissues, a survival blanket, painkillers, allergy medication, etc. Cycling is a pretty safe activity, but longer rides do tend to expose you to unpredictable weather, angry insects and the like.